What is Truth – Good Friday 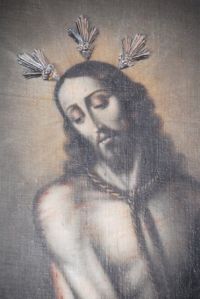 This Good Friday morning I was reading the passage where Jesus and Pilate are speaking;

I was reflecting on the way in which we have traditionally taken Pilate’s remark.  We usually assume a cynical shrug of the shoulders and a throw away line.  However I am not so sure.  I had a conversation this Holy Week with a young Italian (descendant of Pontius Pilate I think not, but at least close enough for me).   He only knows the Church from the outside and has not really been impressed.  However, he is genuine in two areas.  He does not know the Truth who is Jesus, and rather more importantly, he is not sure what truth is since he has only known situational or relative truth.  Might this be true for Pilate?  After all, the Coptic Church believes that he was converted and is regarded as a saint.  http://mb.com.ph/articles/201803/who-was-pilate

This is Good Friday.  I share with so many the horror of what was done to Jesus on this day so long ago.  I want to blame those who delivered Jesus to this death and to malign those who clamored for his crucifixion.  Surely these people from Pilate onwards were lost in the miry clay of the world and its presuppositions?  They were caught up in their sinfulness as well as their lost-ness.  To them all Jesus says, “Father forgive them for they know not what they do.” As Jesus forgave so must we – especially those who might cause us suffering.
What about my young Italian friend?

My mind shifts to Pentecost when Peter preaches the sermon of all sermons.  Filled with the Holy Spirit, he gives witness; God turns the hearts of the multitude to Him.  May we do so too, humbly, contritely, remembering who we were.  What God has done for us this Good Friday is a new beginning.   What happened to Pilate?  What will happen with my young Italian friend?