Learning from John the Baptist

Did John the Baptist do it this way?

I was asked by the little mission in Collique if I would, as part of my monthly visits, baptize some new members.  I of course agreed, not knowing the details just makes things more exciting!  The candidates were prepared by Deacon Jerry Acosta and his wife Edith who started this mission over four years ago.  Their faithful ministry continues to bear fruit in this very poor and northern shantytown of Lima.

Last week I was asked to be ready at nine in the morning at the northern end of the Metro.  There I would be met by a combi and some of the group.  I left the house at seven and was there in forty-five minutes.  That gave me time to sit, pray, read the scriptures and get ready.  I also found someone selling freshly baked bread, squeezing fresh oranges (did I want a plastic bag with a straw or a plastic cup?) so had a great breakfast for seventy cents.  While reading the Scriptures a wonderful old man came by and engaged me in conversation about the blessing and goodness of the Bible. 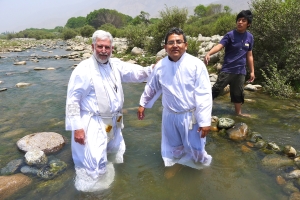 Deacon Jerry and I up to our knees in the river and ready to baptize.

I met the group and off we went in a combi – a combi is the Peruvian equivalent of a Kenyan matatu and would never be allowed on the roads in the US.  It was crowded with teens and Jerry Acosta.  We met up shortly with another combi also full of teens and parents.  I think we were about twenty in all.  We went to Trapiche, which is about 40 kilometers north of Lima. where there is a park, picnic area and the river Chillón.  The distance is misleading as it is a many potholed dirt road and it took an hour and a half plus – after leaving Lima!  Thanks be to God for a careful driver.

As soon as we arrived the group went straight to the river and cleared rocks.  They made a small dam so that the depth was sufficient to immerse a person.  We tested it out on one of our teenaged boys.  It worked.

Smiling and ready to face the world as a Christian!

The four candidates were teenage girls.  They white robes over their shorts and T shirts.  Jerry and I donned our albs.  I did the first part of the service, the questions and exorcism, on the riverbank.  Jerry preached on the baptism of Jesus and then, into the water we went.  Each girl pinched her nose, we tipped her back.  She was fully immersed and I said “Yo te bautizo en el nombre del Padre, del Hijo and del Espiritu Santo.”  They came up radiant and smiling.  The group on the riverbank enthusiastically welcomed them with applause and hugs into the family of God.

Then to lunch on the grass.  My robe and shoes dried in the wind and sun while I napped.  The teens went swimming and had the best time while we few adults chatted.  We headed home about five in the afternoon.  I arrived home both exhausted and energized.  It is not often that I get to do this and it felt very primitive, apostolic and real.  Somehow not using a font, but standing there in the river made baptism so much more relevant.  I was reminded of St. Paul’s words.

Do you not know that all of us who have been baptized into Christ Jesus were baptized into his death? We were buried therefore with him by baptism into death, in order that, just as Christ was raised from the dead by the glory of the Father, we too might walk in newness of life.  For if we have been united with him in a death like his, we shall certainly be united with him in a resurrection like his.
Romans 6:3-6 (ESV) 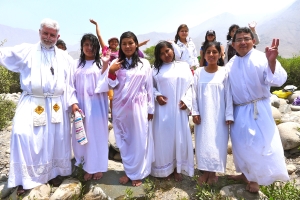 God is so good!

What a privilege it is to be here.  Yesterday was Christ the King Sunday.  Jesus as king gets to order us around!  I never thought to be sent here were I have had to learn another language and often be led around like a child.  It is such a joy.  It seems as if all that has gone before was preparation for this time.  To you who read this – THANKS for your prayers and support.  You make our ministry possible. 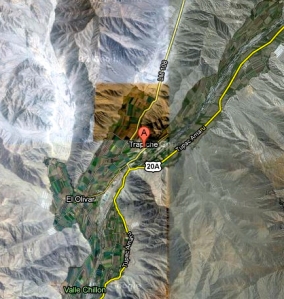 From Google maps showing the river and its fertile valley - we were further up to the right of the marker - where the road and river are closer.